Beginning today, FreightWaves will publish articles under the “FreightWaves Classics” banner. The articles will look at various aspects of the transportation industry’s history. If there are topics that you think would be of interest, please send them to [email protected] The ICC’s original purpose was to regulate American railroads to ensure fair rates and to eliminate rate discrimination. The ICC’s powers and scope were broadened by Congress; it began to regulate other aspects of common carriers, including the trucking industry, interstate bus lines and telephone companies. Congress expanded ICC authority to regulate other modes of commerce beginning in 1906. After more than a century of regulatory authority, the ICC was abolished by an act of Congress in 1995. (Image to right: media.nara.gov)

The ICC oversaw key elements of the nation’s transportation systems for more than 100 years. FreightWaves will examine the history of the ICC and its impact on railroads and trucking – and what has happened since the agency’s demise.

After Congress passed the Interstate Commerce Act of 1887 it was signed into law by President Grover Cleveland.

The Commission was created as the result of widespread and long-standing animosity to the railroads. Westerners in general, and farmers in particular, believed that the railroads possessed economic power that they systematically abused. While the railroads “opened up the West” (spurring population expansion first into the Midwest and then the West), their economic and political power was both feared and hated. A key issue was rate discrimination between similar types of customers and communities. Other issues included the alleged influence the railroads had over elected officials and bureaucrats at the federal, state and local levels.

President Cleveland appointed Thomas M. Cooley as the ICC’s first chairman. He had served as Dean of the University of Michigan’s Law School and Chief Justice of the Michigan Supreme Court.

Early years of the ICC and legal challenges to its authority

As it was first passed by Congress, the Interstate Commerce Act did not provide the ICC with adequate enforcement powers. While the ICC set maximum shipping rates for railroads, several railroads challenged the Commission’s rate-making authority. By the late 1890s a number of court decisions had severely limited the ICC’s powers.

Therefore, Congress expanded the ICC’s powers in subsequent legislation. The Railroad Safety Appliance Act of 1893 gave the ICC jurisdiction over railroad safety (removing this authority from the states), and this was followed by further amendments in 1903 and 1910. In addition, in 1906 the Hepburn Act authorized the Commission to set maximum railroad rates, and expanded the ICC’s authority to regulate “common carriers.”

Congress continued to expand the Commission’s powers. There were legal arguments over how to interpret the 1887 Act language that banned long-haul/short-haul fare discrimination. In 1910, the Mann-Elkins Act again strengthened ICC authority over railroad rates. Congress also expanded the ICC’s jurisdiction to include regulation of telephone, telegraph and wireless companies. (In 1934, Congress transferred the telecommunications authority to the new Federal Communications Commission.) (Photo below from Britannica.com) 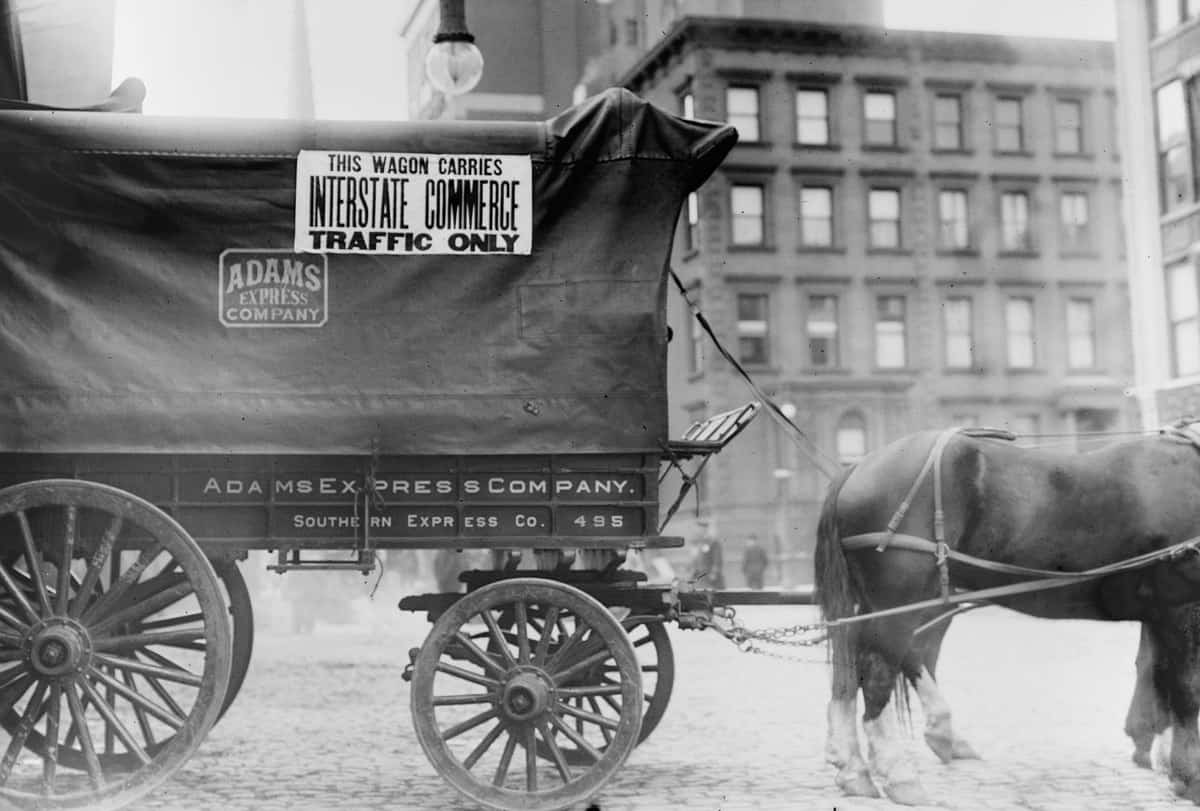 In 1935, Congress again expanded the ICC’s authority. It passed the Motor Carrier Act, giving the Commission the authority to regulate interstate bus lines and trucking as common carriers. In 1940, Congress passed legislation that gave the ICC jurisdiction over vessels on the nation’s inland waterways. At that point, the ICC regulated all forms of freight transport in the United States except for air cargo.

Deregulation and the demise of the ICC

The ICC regulated railroads for more than 80 years and interstate trucking for more than 45 years. (Critics of the ICC stated that the Commission over-regulated these industries, stifling competition and causing costs to rise.) However, times and circumstances changed. Over about a 20-year period, a number of actions by the executive branch and Congress sharply curtailed the ICC’s powers to regulate interstate transportation.

That legislation (along with actions by presidents Nixon, Ford and Carter and pro-deregulation ICC commissioners) successively deregulated, either in whole or in large part, interstate trucking, railroads, bus service, and freight forwarders, and lifted most of the remaining motor carrier restrictions, including those imposed by the states.

Congress finally abolished the Commission in December 1995 (the ICC Termination Act of 1995). Gail McDonald, the ICC’s final chair, oversaw the transfer of its remaining railroad-related functions to a new agency, the U.S. Surface Transportation Board (STB). The STB reviews railroad mergers and acquisitions, rail line abandonments and railroad corporate filings. Twenty-five years earlier, jurisdiction for rail safety-related issues (such as hours of service rules, equipment and inspection rules/standards) was transferred from the ICC to the Federal Railroad Administration as a result of the Federal Railroad Safety Act of 1970.

Regulation of motor carriers (trucking companies and interstate bus lines) became the responsibility of the Federal Motor Carrier Safety Administration (FMCSA), which is an agency within the U.S. Department of Transportation. (Photo below from USDOT.) Despite its many detractors, the ICC served as a model for later regulatory efforts. The ICC’s commissioners and staff members were full-time regulators who could have no economic ties to the industries they regulated. As they were created, a number of federal and state agencies adopted a structure similar to the ICC. Many agencies created after the ICC were also modeled after it as independent commissions with an odd number of commissioners who served staggered terms. Among the federal agencies that followed the ICC model were the Federal Trade Commission (created in 1914), the Federal Communications Commission (1934), the U.S. Securities and Exchange Commission (1934), the National Labor Relations Board (1935), the Civil Aeronautics Board (1940), the Postal Regulatory Commission (1970) and the Consumer Product Safety Commission (1975).

In Part Two of this series, the impact of the Interstate Commerce Commission on the railroad industry will be examined.