Even as city and state officials urge residents to flee ahead of high winds and flooding, truck drivers answer the call to haul emergency supplies to areas where hurricanes are expected to strike. That’s doubly true now, as two potential hurricanes bear down on the Gulf of Mexico. But the way they heed that call has a huge impact on when, how and how much they get paid, FreightWaves CEO Craig Fuller points out.

According to the National Hurricane Center, Tropical Storm Laura could become a Category 1 hurricane early next week as it moves into the Gulf of Mexico. Landfall as a hurricane is possible Wednesday between New Orleans and Tallahassee, Florida. 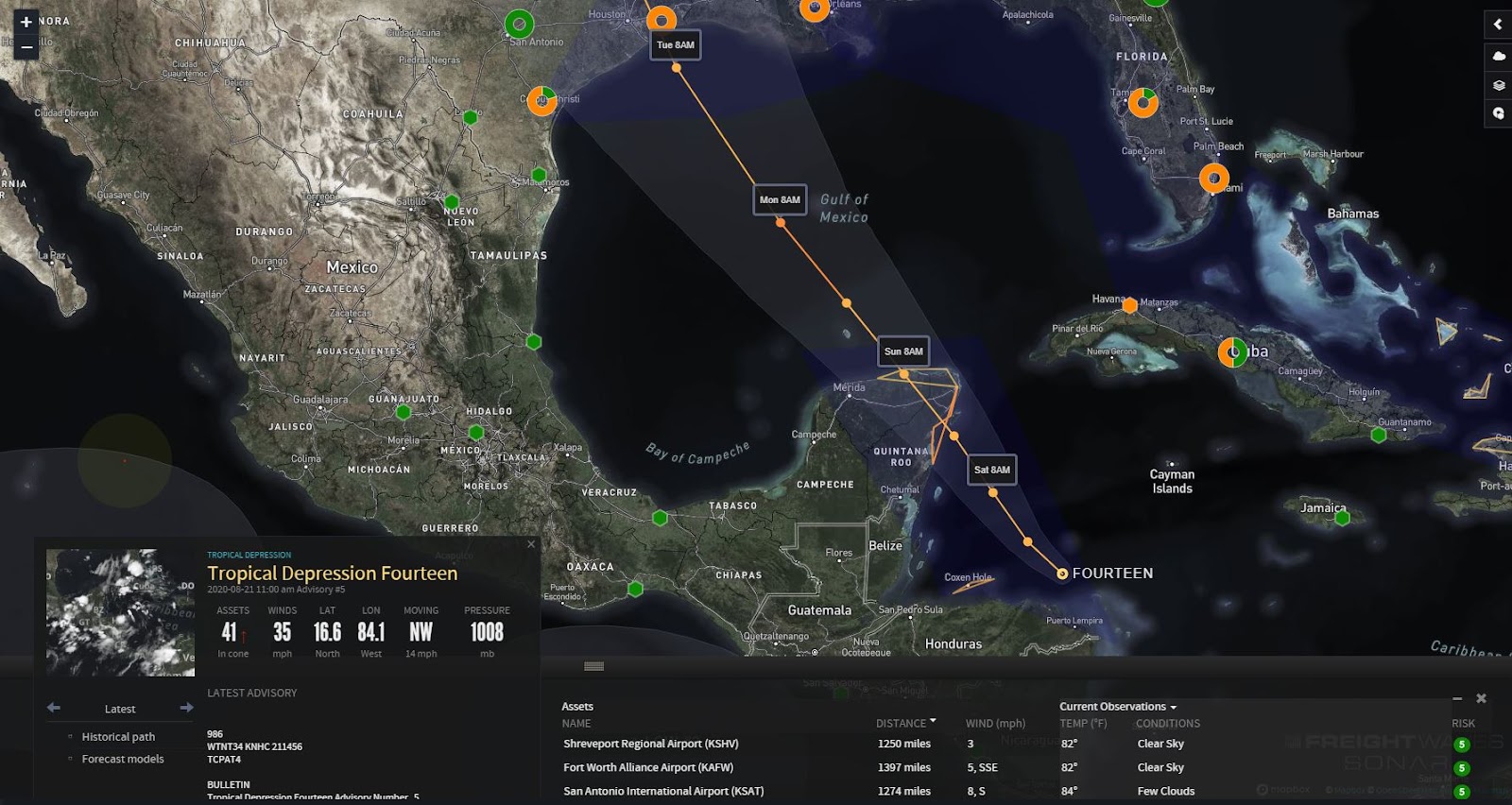 Years before founding FreightWaves, Fuller ran Xpress Direct, the on-demand emergency unit of U.S. Xpress, from  2002 until 2005. Over the course of his four years dealing with hurricane activity, his division handled in excess of 20,000 shipments and billed over $100 million in revenue in disaster relief loads alone.

If both possible hurricanes make landfall next week, Fuller said the potential effect on heavily populated areas could be “a lot of damage and a lot of freight.”

“Hitting Florida is certainly going to impact potential residential areas, and perhaps some commercial areas and tourism and beaches could be at risk,” Fuller said Friday on the FreightWaves podcast WHAT THE TRUCK?!? “Hitting the Gulf Coast is a completely different set of scenarios if we’re talking about southern Mississippi, Louisiana and Texas, and it has to do with the oil infrastructure and rigs that are there, as well as pipelines.”

Fuller said that if the hurricanes head toward those oil rigs, companies will be forced to shut them down, which could impact pipelines and refineries.

“The oil rigs will start shutting down, if not already, and they will be moving people back to the shores and trying to prepare for the hurricane,” he said. “What we should expect over the next couple of days is that the state governments will start responding and requesting assistance from FEMA, as well as ordering product, in terms of supplies and repairs. So we’ll see lots of loads of bottled water and preparation supplies like plywood, gas cans, duct tape, batteries and flashlights, that will be sent into those pre-staging areas.”

What to expect when hauling FEMA loads

While trucking demand will increase and rates may soar, Fuller said it’s important for truckers to ensure that daily detention rates are built into their confirmation sheets. Often, it could take days, and sometimes weeks, before trucks are unloaded, which could prove costly if detention pay is not built into a driver’s daily rate.

“This is a big problem for trucking companies if they’ve not hauled FEMA disaster relief loads before, and some of the brokers that are involved in the process can take advantage,” Fuller said. “They may not pay you detention, which is bullshit, because the federal government pays the broker detention. They will ask for documentation, but make sure that you get paid for detention because it’s your equipment and you’re the one that’s stuck.”

Be prepared for slow payment

Truck drivers who haul FEMA loads shouldn’t expect to be paid immediately as freight brokers must first submit paperwork to FEMA, which can be a long and exhausting process.

“What I would recommend doing is going in and finding someone that can accelerate your payment, perhaps a quick pay service or a factoring company that can actually help pay for those freight bills,” Fuller said. “Because if you don’t, you’re going to have problems getting paid. Also get everything in writing: Make sure that you have your confirmation sheets with detention, all of it in writing.”

Prepare for chaos at staging areas

Potentially extended delays in unloading even critical supplies call for some planning.

Fuller said drivers should stock up on groceries, prepare for possibly no cellphone service and rely on their CB radio in preparation for long waits. Fueling up prior to entering the pre-staging area is critical as many fueling stations are closed because of high winds or flooding.

“Make sure you bring board games, cards, books, things that can sustain you, and also prepare to bring your own refreshments and snacks,” Fuller said. “If you’re going into a military zone, potentially they’re not going to have great food for you and the convenience stores are going to be completely knocked out. So bring some groceries and materials to entertain yourself.”

This is a developing story. Stay tuned to FreightWaves for updates.

Nick Austin, director of weather analytics and senior meteorologist, and Timothy Dooner and Michael Vincent of WHAT THE TRUCK?!? contributed to this report.

Clarissa has covered all aspects of the trucking industry for 14 years. She is an award-winning journalist known for her investigative and business reporting. Before joining FreightWaves, she wrote for Land Line Magazine and Trucks.com. If you have a news tip or story idea, send her an email to [email protected]