Despite a major awareness campaign following the 2009 murder of Jason Rivenburg while he slept in his cab at an abandoned gas station after being unable to find safe parking, the shortage of safe truck parking spaces in the country continues to grow.

That was the primary takeaway from the Jason’s Law Truck Parking Survey and Assessment released Tuesday by the Federal Highway Administration (FHWA). The assessment, based on a survey that concluded in 2019, was a long-awaited update to the first Jason’s Law survey in 2015.

“Truck parking shortages are still a major problem in every state and region of the country,” Jeff Purdy, a transportation planner with the FHWA’s Office of Freight Management & Operations, said during a meeting revealing the latest survey results. “Major freight corridors and large metro areas have the most acute shortages,” with shortages existing at all times of the day but mostly overnight and weekdays, he said. “There is, however, much more awareness from all stakeholders about the truck parking problem.” 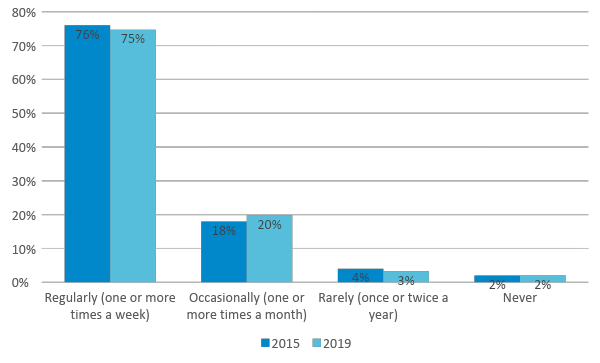 The 2019 survey was considered an improvement over the 2015 survey in that there was a significant increase in respondents — and therefore a presumed increase in data accuracy. For example, the number of drivers responding to the survey increased 43% to 11,696. Trucking manager respondents increased 205% to 760, and truck stop operator respondents were up 34% to 524.

The 2019 survey was also expanded to include the growing issue of truck drayage at ports, and included responses from 18 port authorities.

“Ports have their own challenges on congestion due to the scope and scale of vessels discharging 10,000 to 15,000 containers at a time,” said U.S. Maritime Administrator Mark Buzby during the meeting. “The last month or two with the great flood of inbound containers has exacerbated the problem” for drivers trying to schedule pickup and delivery times, he said.

While the latest survey found a 6% increase in public parking spaces and an 11% increase in private parking from 2014 to 2019, there was a 15% increase in truck vehicle miles traveled between 2012 and 2017. In addition, the latest survey found new shortages had emerged in areas that included the entire Interstate 95 corridor, Pacific-region corridors, and throughout states surrounding the Chicago region — in addition to shortages in the same locations identified in 2014.

Responses from state transportation departments revealed that few new public facilities or spaces are being developed, and that challenges continue in planning, funding and accommodating truck parking.

Desiree Wood, president of REAL Women in Trucking, commented in an email to FHWA during the meeting that Rivenburg “would not have been able to pay $12, $15, $20 a night to park his truck safely. What are we doing to address the issue that most company truck drivers are not reimbursed for paid reservation truck parking, who is paying for it?”

The Owner-Operator Independent Drivers Association (OOIDA), which worked to get bipartisan truck parking legislation introduced in March incorporated into a major infrastructure package passed by the House of Representatives in July, saw those efforts come up short as no action on either bill will be taken by the end of the year.

However, “the parking issue is one that we’ve been fighting for years, and we’ll continue to push for that in the next highway bill or any stand-alone legislative opportunity as well,” OOIDA Executive Vice President Lewie Pugh told FreightWaves in September.

“Billions of dollars have been added to the national freight bill due to lost productivity,” commented Darrin Roth, vice president of highway policy for the American Trucking Associations, during the meeting. “It’s hard to imagine being a driver and not being able to find a safe place to sleep. I hope the next administration can continue to treat the truck parking shortage with the seriousness it deserves.”

Based in Washington, D.C., John specializes in regulation and legislation affecting all sectors of freight transportation. He has covered rail, trucking and maritime issues since 1993 for a variety of publications based in the U.S. and the U.K. John began business reporting in 1993 at Broadcasting & Cable Magazine. He graduated from Florida State University majoring in English and business.