Truck traffic is about back to normal on the nation’s highways and interstates, according to a study of 130 million trips by fleet management solutions provider Samsara Networks’ 15,000 customers. Two safety-related items stand out:

Samsara looked at traffic and driving before, during and after lockdowns across the United States. It also sampled five cities: Atlanta, New York City, Chicago, Houston and San Francisco. Speeding jumped 40% in those cities early April compared to the 20% increase nationwide. Samsara set its pre-COVID baseline for the week of March 8. 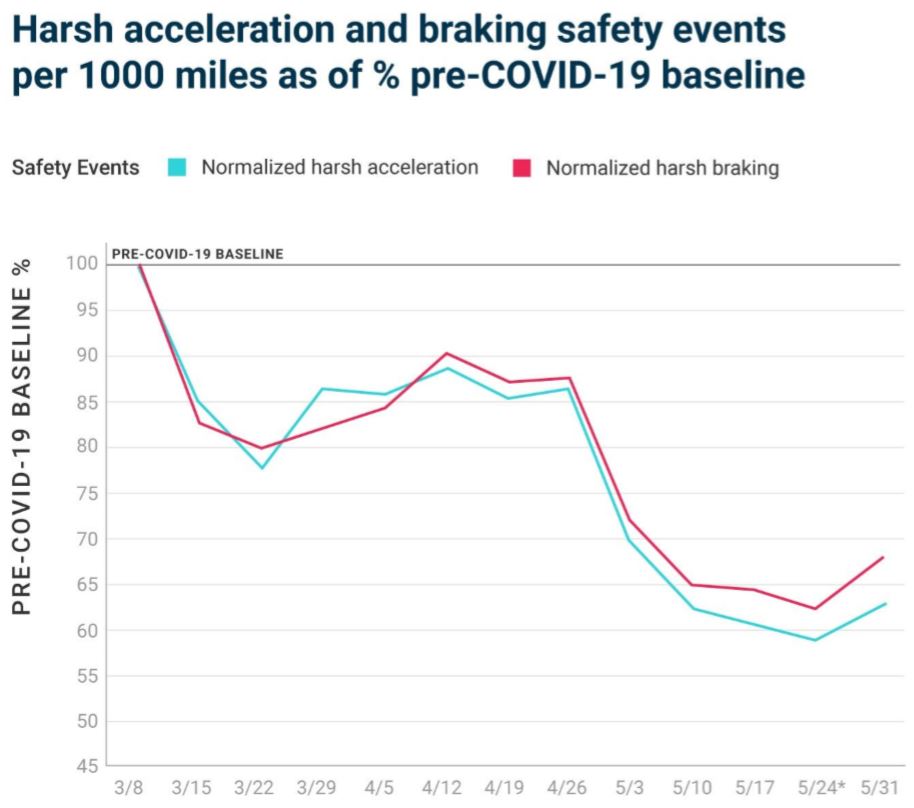 Emptier roads after that resulted in a ​20% increase in severe speeding — 11 or more mph above the speed limit — especially in urban settings. Truckers navigating the American Transportation Research Institute’s worst bottlenecks practically cruised through troublesome junctions in Atlanta and Houston, three of the top five congestion hot spots.

By May, as states began to lift shelter-in-place orders and more vehicles returned to the roads,  speeding started to decrease.

Fewer passenger vehicles are on the road to cut off big trucks in traffic. That means fewer stop-and-go conditions where a truck needs to accelerate quickly to avoid falling behind traffic that suddenly begins moving. On average, a truck traveling at 60 mph needs nearly seven seconds to ​safely decelerate, more if the driver’s reaction time is slower.

On average, states have ​returned to above 95% of pre-COVID-19 commercial driving activity​, both in miles driven and vehicles on the road. This is consistent with findings by Daimler Trucks North America, which pulled telematics data from 130,000 Freightliner trucks. It predicted 95% normal traffic volumes by the end of June.

Even during the difficult month of April, truck drivers during the week of April 11-17 logged just 13% fewer miles , according to traffic data firm Inrix.

Fuel data also supports a more or less V-shaped recovery in trucking. TravelCenters of America (NASDAQ: TA) said diesel fuel sales were up 2% year over year in the second half of May and 6.7% for the month through Friday.

States that had limited or no shelter-in-place orders are now seeing a 7% average increase in miles driven and vehicles on the road.

Some states where shutdown guidelines were less stringent, like Iowa and Nebraska, saw traffic declines of 10% at the worst. Recently, traffic volumes are exceeding pre-COVID-19 activity.

The return to normal driving patterns and miles traveled varies among industries.

Industries like passenger transit and school buses are experiencing a sustained impact from the  pandemic. Passenger transit activity has stabilized at around 35% of pre-COVID-19 levels and educational services activity remains below 10%.

The oil and gas industries are operating at 60% of pre-COVID-19 commercial activity. Construction is running 5% above pre-COVID-19 levels in recent weeks. Public works as well as commercial and residential projects have largely been allowed to ​resume work in early phases of state reopenings​ if specific safety measures are followed.

Alan Adler is an award-winning journalist who worked for The Associated Press and the Detroit Free Press. He also spent two decades in domestic and international media relations and executive communications with General Motors.