Welcome to the WHAT THE TRUCK?!? newsletter. In this issue, truckers honking for kids; a season of no peak; iPhone 14 adds crash rescue feature; surgery performed via EV; and more.

Winter is coming — Labor Day has come and gone with nary a blip on dry van spot rates and tender rejects. Although the great spring spot market slide of ’22 has slowed its pace over the summer, any hope for a fall/winter uptick is looking dire. The Logistics Managers’ Index (the index of the cool kids) has shown five straight months of an increase in capacity. Without enough freight to fill that excess capacity, it’s going to be a contentious winter between driver and broker.

“The last six months have seen a concerted effort by firms to run down the high levels of goods that were on hand this spring. Many retailers have worked hard, and in some cases taken significant financial losses, to decrease inventory levels. Despite these efforts, there is still a significant level of inventory in the system.” — Logistics Managers’ Index

Revenge of the shipper? — FreightWaves founder and CEO Craig Fuller published a warning to carriers last week about shippers out for blood as they seize control of the market after a two-year-long imbalance. Fuller calls out the short memory of carriers: “Along the way, carrier executives convinced themselves that the freight market was ‘different this time’ and their ability to have pricing power would remain in place indefinitely.” 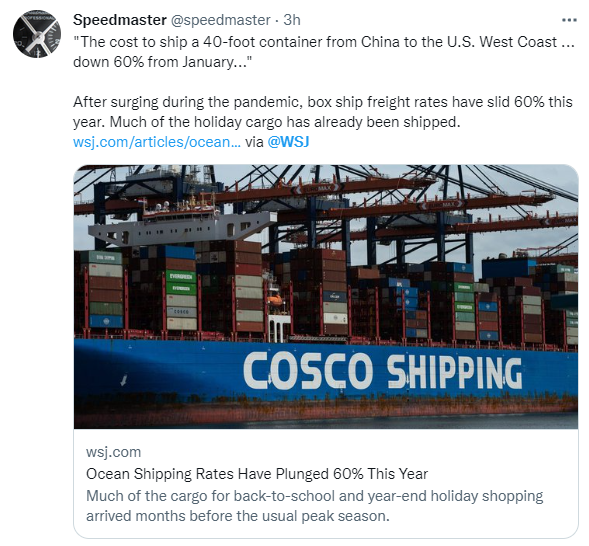 A bronze lining — There is some good news in all of this: The market has been relatively stable, albeit with capacity loosening, for months. We’re also seeing a drastic drop in ocean container rates. Ultimately, if these freight reductions along with lowering fuel costs lead to a drop in consumer prices, we should start to see some correction. And by that, I mean, people will start buying sh*t again. Regardless of which side of the freight pendulum you’re on, I think we can all use some price breaks at the cash register these days (and some more freight on those trucks!)

Meanwhile — Remember last year when we wouldn’t shut up about all the vessels off the coast of SoCal. Heck, there were even conspiracy theories centered around vessel maps that tried to claim all the containers were filled with Chinese military or other nefarious actors! Well, it’s a new dawn and a new day. As of last week there were only eight vessels hanging out in San Pedro Bay. In fact, of the 130 vessels waiting at North American ports, the entire west coast only made up 27% of the ships.

Do you honk for the kids? 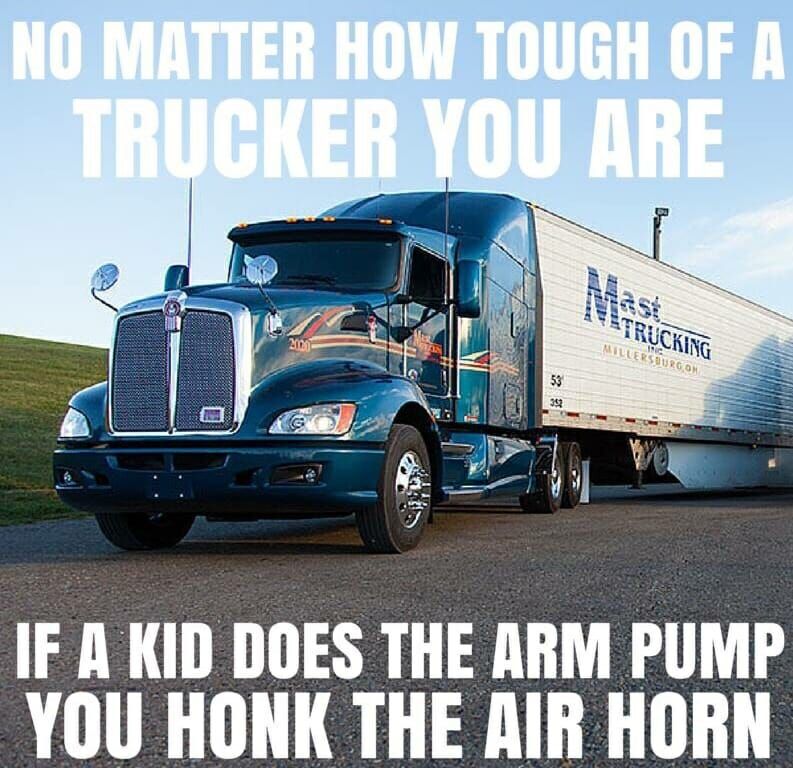 The song of the streets — Drivers, when you see a kid give that universal honk-the-horn hand signal, do you oblige? Personally, I’ve deducted points from the Nikola Tre for the awful decision not to include a pull chain and praised Hyliion for keeping with tradition in its trucks by including one. But how do drivers feel about getting asked to honk? The topic recently came up on Reddit.

Next week is your time to shine — With Truck Driver Appreciation Week coming up, you probably have some big plans to tweet a thank-a-trucker hashtag, maybe make a graphic, or perhaps stand in front of your corporate jet (don’t do that). … Instead, I say ask for the horn. Give some real drivers a second of your attention and throw that fist pump high and proud at ’em. You may be surprised just how much you’ve helped a driver get to that next mile. And of course, with any luck, you’ll hear the song of the streets. Actually, that’s kinda cool — It’s been years since a new iPhone release was really all that exciting. As of late, each new iteration has seemed about as innovative as the latest Madden release seeming more like a roster update than a game changer. On Wednesday, Apple announced the iPhone 14, and while it smelled awfully familiar there was one thing that stood out: “With Emergency SOS via satellite, iPhone front-loads a few vital questions to assess the user’s situation, and shows them where to point their phone to connect to a satellite,” Apple said in a release.

I’ve fallen and I can’t get up — No, this isn’t LifeCall, but it is Apple’s emergency response unit. How does it work? According to Apple, “This breakthrough technology also allows users to manually share their location over satellite with Find My when there is no cellular or Wi-Fi connection, providing a sense of security when hiking or camping off the grid.” In addition, the phone can detect a car/truck crash and dial emergency services for you. Trucking off the grid, broke down in a dead zone, in a wreck or find yourself in poor circumstances you can’t get out of? Tim Apple may just save your ass.

Would you get a Rivian-powered vasectomy?

Vas deferens divided — As if you weren’t nervous enough about what’s going to happen to your junk, now the doctor tells you he’s going to perform it by using the power from his Rivian truck. On Sept. 1, Dr. Christopher Yang showed up at his office in Austin, Texas, only to realize the power was out. As he was planning to cancel the day’s surgeries, a staffer joked that they should hook it up to the EV. That’s when Yang got the extension cord. Turns out, the surgery went as well as a vasectomy can go. Yang even says that the Rivian was able to power the whole office for four hours. As impressive as this was, Twitter user ViperTrades2 suggested, “Patient could have bought a tesla and professed his love for Elon and accomplished the same thing with no pain.” 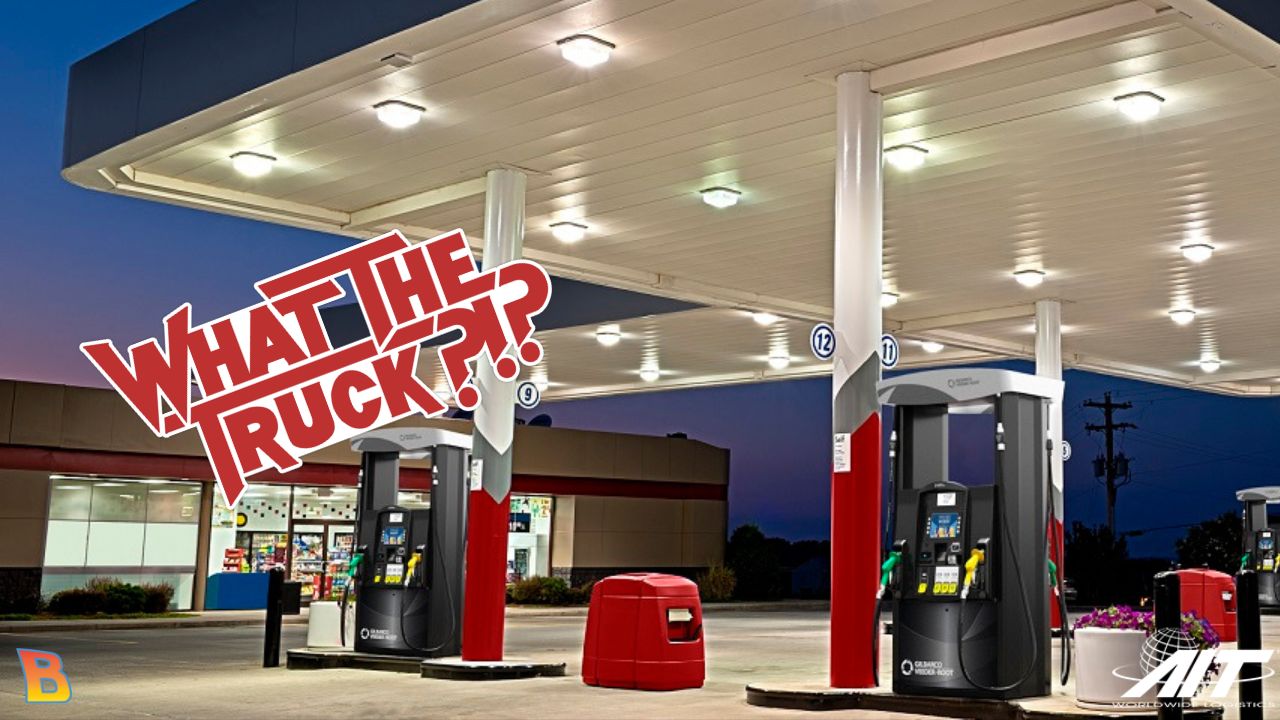 Truck stop logistics and the future of fuels — Friday on WTT we’re going inside and outside the pump as we look at how truck stops work and the tech behind the pump. We’ll learn about what the future holds for fuels and charging as well as what the truck stop of the near future will look like. Plus, a freight market breakdown and this week in news.

Catch new shows live at noon ET Mondays, Wednesdays and Fridays on FreightWavesTV, FreightWaves LinkedIn and Facebook, YouTube, or on demand by looking up WHAT THE TRUCK?!? on your favorite podcast player.

What The Truck?!? live from FreightWaves’ AEV Summit 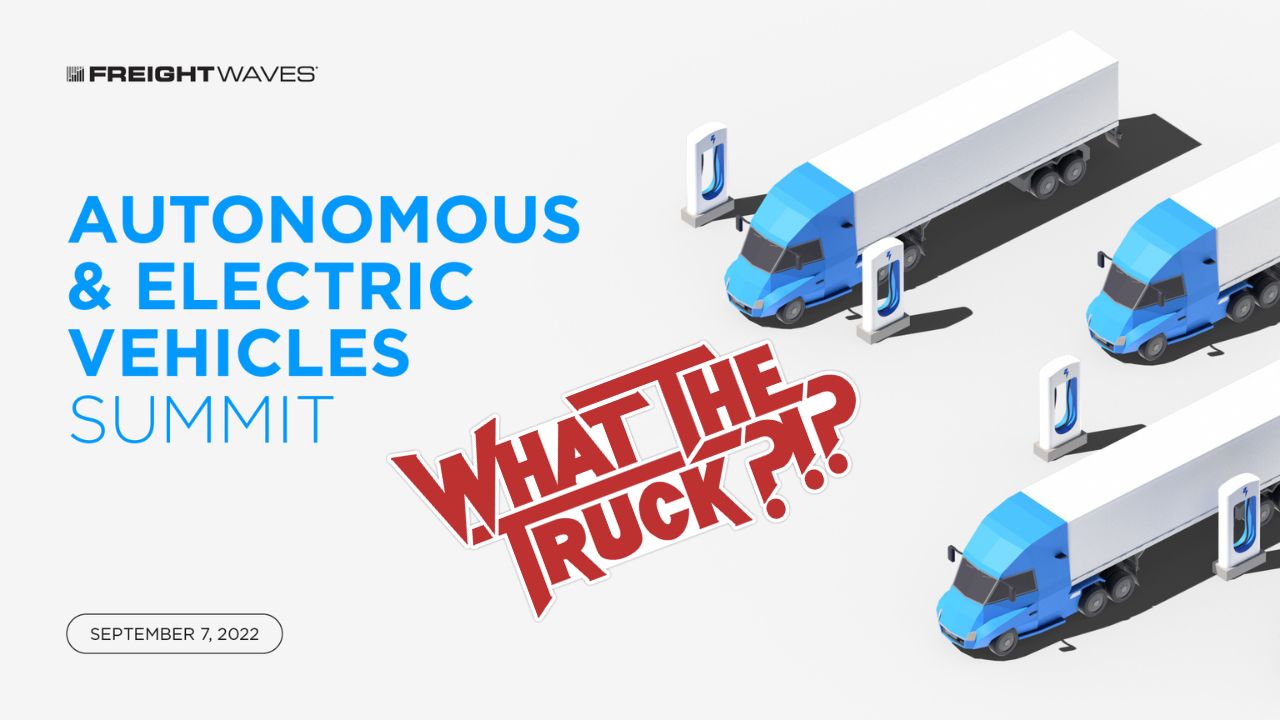 Hyliion’s Healy, right to repair and the brutal truth of selling on Amazon

Thanks for reading and forwarding to your connections!

Read the latest on Back The Truck Up