This is Transmission, a twice-weekly newsletter assembled to chronicle the seismic shift in auto supplier networks as the industry goes cross-border and electric.

Last Thursday, Daimler, the parent company of Mercedes-Benz (MB), announced its capex plan for the next 5 years, worth about $85 billion. The German automaker wants to put all its time and energy into R&D and building infrastructure that supports the production of EVs, such as plant improvements and equipment upgrades.

Daimler will primarily be using the cash to upgrade Mercedes-Benz’s EV fleet and its truck division. MB was supposed to release the EQC, an electric SUV, back in 2019, but decided to focus on European demand since the vehicle was introduced overseas first. MB already has electric trucks on the market, like the Freightliner eCascadia and eActros, but will continue building the fleet and improving upon current technology.

Many major automakers have recently unveiled their EV strategies. Volkswagen committed to spend $86 billion on EV development and said tschüss to its motorsports division. Audi, a member of the Volkswagen Group, has increased EV spending to $18 billion. GM is throwing $27 billion into its EV fleet. You get the point. If large auto companies want to stay ahead of the curve, they should focus on the future and place heavy investment in EVs.

Daimler’s work council and the company’s board held a number of meetings prior to the announcement, which were reported as being “controversial discussions”. Maybe that’s why it took Dailmer so long to unveil the new investment plan? One thing’s for sure, the EV race is heating up. GM is all hands on deck. Tesla is miles ahead of everybody else. And Daimler? They’ve been slower than other automakers in bringing electric vehicles to the market. This investment plan signals Daimler’s serious intentions to grow their EV fleet in order to compete.

In other pandemic news, Volvo Trucks North America is discontinuing the sale of Class 8 trucks in Mexico. Volvo Trucks de México stated on its Facebook page, “The global business scenario has changed significantly. In that context, Volvo Trucks has conducted a deep analysis of its business strategy and decided to discontinue sales of its full tract truck portfolio in Mexico.”

The Swedish truck maker is owned by AB Volvo and will be shifting priorities to help current customers with maintenance and distribution throughout its network. Mack Trucks, the sister brand of Volvo, will continue to sell its product portfolio.

Freight and cargo market share in Mexico is largely dominated by Paccar Inc.’s Kenworth, Daimler Trucks North America’s Freightliner and Navistar International, with Volvo only representing about 1.8% of the market. Combine that with the pressures to succeed during the worldwide pandemic, it comes to no surprise that Volvo is halting sales.

Add this to the list of setbacks the auto industry in Mexico has faced this year. Intermodal movement this year has seen a -21.4% drop in volume this year. Production shortages have arised due to strict lockdowns and emerging outbreaks. If things couldn’t get worse, the recent spike in outbreaks is only going to cause potential hiccups, specifically labor shortages at suppliers and in the supply chain, delaying industry recovery even further.

But there is some light at the end of the tunnel. Laredo, TX was the top international gateway for trucks in the U.S, moving around 2.7 million trucks in 2019. Interestingly, Laredo cross-border movement has knocked last year’s volumes out of the park, even amidst the pandemic. The setback in the spring saw volumes plummet, but it looks as if a full recovery has been made. Why? Freight volumes have been elevated across the country because of distorted consumer spending patterns.

Nikola Corp. has been in the headlines lately and not for the right reasons. ICYMI:

As disappointing as the aborted deal was, Nikola now has the chance to shift focus on the positives and turn attention to it’s prototype battery-electric truck production in Germany and building its U.S. plant. 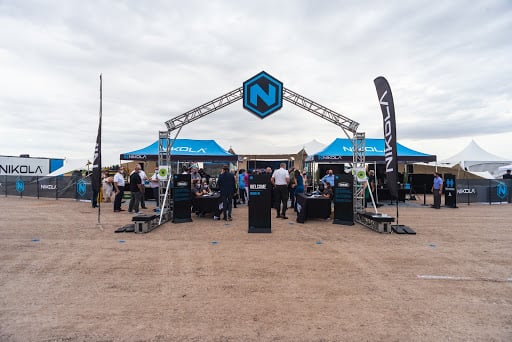 (Image: Nikola. Nikola’s manufacturing plant in Coolidge, AZ is on pace despite criticisms.)

Back in July, Nikola broke ground on its production plant, located in Coolidge, AZ, but took months to actually begin construction, which led to criticism on social media. However,  Pinal Land Holdings (PLH) CEO Jackob Anderson says that construction is on pace with projections to finish up the first phase, Phase 0.5, which sees the company assemble battery-electric Tre models, by late 2021.

It’s safe to say that if you couple the criticisms and negative press with the ongoing pandemic, Nikola has been through hell and back this year. The challenge for any startup‒especially one that has generated so much buzz‒is to match the hype with performance.  If Nikola returns to the original idea of building heavy trucks, it can get right back on track. What’s keeping them alive? Excitement for long-term success. Investors still believe in the company’s potential to match the hype, which is encouraging news for Nikola moving forward.

Like what you just read? Join the community! Sign up from Transmission and get insight, news, and analysis regarding the automotive supply chain: https://freightwaves.com/transmission