Welcome to the WHAT THE TRUCK?!? Newsletter. In this issue, PS5 delays extend into 2022, spot rates spike, who are the pipeline hackers, Nike and Postal Service settle on sneaker, and more.

Rates rocket back up

To the moon — Spot rates have shot up like “The Price Is Right” mountain climber as we’re now just a dime away from hitting a new all-time high in SONAR. The Truckstop.com dry van average continues its second consecutive week of elevation, rising 18 cents per mile this week to $3.23/mile, inclusive of fuel.

How long will they stay there? — Andrew Cox reports declining tender volumes last week may be a function of the Commercial Vehicle Safety Alliance’s 72-hour safety blitz, a time when many drivers take off and shippers respond accordingly by pushing or pulling freight away from this week. Fewer drivers equals less capacity and higher rates. Now that those drivers are back behind the wheel, and since both volumes and outbound tender rejects are down, it’s likely rates could fall as well.

Semiconductor shortages strike again — Still looking for a PS5? Ever actually seen one in the wild? You may have to hurry up and wait. Bloomberg reports Sony Group Corp. has warned a group of analysts that the console shortages will persist into ’22. The culprit? The same issues hampering auto manufacturers: the global shortage of components and semiconductors. Sony Interactive Entertainment CEO Jim Ryan has been in discussions with AMD to increase production, however chip output is still nowhere close to meeting demand.

“I don’t think demand is calming down this year and even if we secure a lot more devices and produce many more units of the PlayStation 5 next year, our supply wouldn’t be able to catch up with demand.” — Sony Group Corp. Chief Financial Officer Hiroki Totoki

Consoldout — When PS5 preorders went live last year on Sept. 17, millions of people encountered ordering glitches, outages and frustration. Personally, I spent hours refreshing Best Buy’s site before finally lucking out. That hasn’t been the case for most, and now Sony is concerned that PS5 sales won’t keep pace with its previous console, PS4. Demand is still highly elevated but mostly to scalpers’ benefit. On eBay, the $599 next-gen system is marked up to nearly $2,000.

Plan on getting a Nintendo Switch instead? — Nintendo of Japan has also warned analysts that supply chain shortfalls are impacting both inventory and sales. According to Ars Technica, Nintendo forecast a 12% drop in sales of its flagship Switch in the financial year ending in March 2022, citing potential issues with procuring important components. One Redditor joked, “Sony announces PS5 shortages to last until launch of PS6.”

No mulligans — DarkSide, the ransomware gang responsible for the cyberattack that led to the shutdown of Colonial Pipeline, is now expressing regret over the situation, FreightWaves’ Nate Tabak reports. “Our goal is to make money, and not creating problems for society,” the DarkSide ransomware gang said in a post to its leak site. But the gang is now running damage control as one of its affiliates may have used the ransomware-as-a-service tools to commit the pipeline attack.

Who is DarkSide? — The relatively new hacking group was first noticed in August of last year by security firm Kaspersky. The collective likens itself to the Robin Hood (folklore not retail trading app) of the ransomware community. DarkSide claims on its website that it would not target hospitals, hospices, schools, universities, nonprofit organizations or the government sector. DarkSide’s ransom demands range from $200,000 to $2 million, with the amount largely dependent on the victim.

Ransomware as a Service — Brett Callow, a threat analyst at cybersecurity software firm Emsisof, describes RaaS as a service provider that supplies hacker affiliates with the tools to stage attacks. RaaS allows ransomware to increase in scope, size and velocity as these tools can be licensed to groups beyond the initial developers. Just as SaaS tools like Salesforce are sold to legitimate organizations that don’t want to build their own CRMs and marketing tools, RaaS is sold to hackers who don’t want to build their own malicious software.

Back online — FreightWaves’ John Kingston reports, in a statement released midday Monday, Colonial Pipeline, which shut the line following a cyberattack, said it had a goal of “substantially restoring operational service by the end of the week.” The statement was conditional, noting that the process required “diligent remediation of our systems, and this takes time.”

Where’s the gas? — While the pipeline may not have an immediate direct impact on fuel supplies, drivers across the country are reporting that gas stations in their areas are out of certain grades of fuel as panic buying ensues. CNN reports a growing number of gas stations along the East Coast are without fuel as nervous drivers aggressively fill up their tanks. Will gas be the new toilet paper?

Paying the postage — Nike and the U.S. Postal Service have come to a licensing agreement for the all-white Experimental Nike Air Force 1 sneakers. A month ago, the house that Air Jordan built was put on blast by the Postal Service for using its intellectual property without permission. WWD reports the Postal Service issued a statement that said it “receives no tax dollars for operating expenses and relies on the sale of postage, products and services to fund its operations, protect its intellectual property.” Financial details regarding the licensing deal have not yet been disclosed.

Wait a minute — You may be reading this thinking, didn’t Nike just cause a huge issue over MSCHF and Lil Nas X’s Satan Shoe for doing the same thing that Nike had done to the Postal Service? Sort of. In that case, Nike argued branding damage due to some people taking offense to the sneaker’s use of satanic imagery and that it can’t be responsible for defects or health issues that may occur from an aftermarket sneaker. Nike and MSCHF have settled their case.

Room with a view 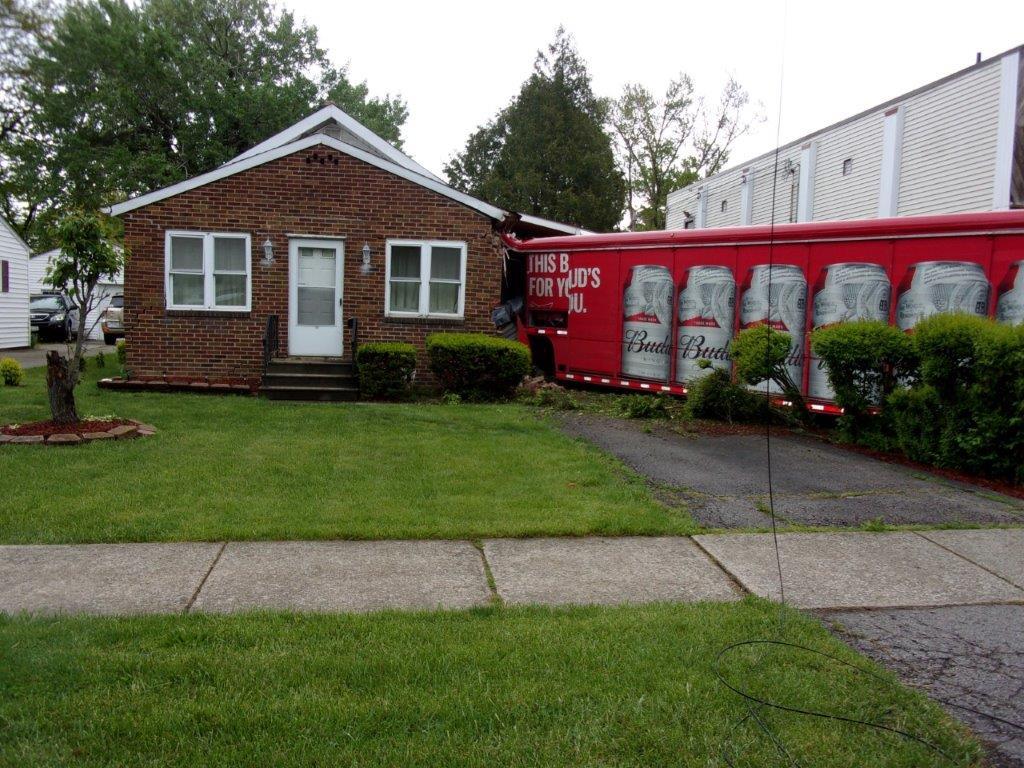 This Bud’s for you — A homeowner in Avon Lakes, Ohio, got a delivery that hit a little too close to home when a Budweiser truck crashed into the living room. ABC News 5 Cleveland reports a truck hauling a Budweiser trailer hit a vehicle that ran a stop sign, causing it to crash into a house. The driver of the truck was injured, but no injuries were reported inside the house.

Education and law of the sea — Thursday at 3:30 p.m. EDT, I catch up with Lauren Beagen, a Roger Williams University School of Law adjunct professor. We’re talking about how the world of maritime law works. With supply chains strained, the echoes of the pandemic pummeling production and port congestion lingering, shipping has become risky business. Plus, Kim Kardashian shipped an ancient Roman sculpture to the Port of LA. Is she in trouble?

Wednesday — We’re excited to continue our coverage of Supply Chain Education week on WTT/Insiders with Anna Nagurney, a University of Massachusetts Amherst professor. Her focus is the applied and theoretical aspects of network systems, particularly in the areas of transportation and logistics, critical infrastructure and in economics and finance. So be prepared to get wicked smart, kid.

Pipelines, bullwhips and death by disruption

Ran it right over — Hear how one team driver ended up running over his partner’s butt while caught in a trucker trap right here.