Welcome to the WHAT THE TRUCK?!? newsletter sponsored by TriumphPay. In this issue, misplaced blame in the Suez, Brooks Brothers leaves warehouse holding the bag, is infrastructure plan a boon for trucking, the $1 trillion cybercrime problem and more. 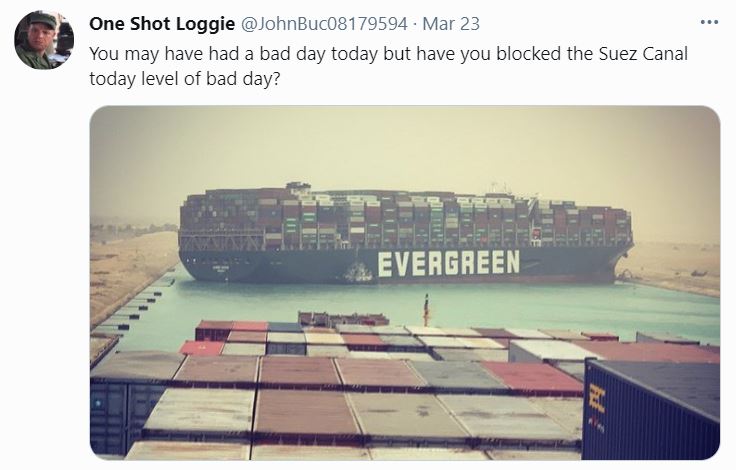 Blame game — Shortly after the Ever Given got wedged in the Suez Canal, costing shippers $400 million an hour, Marwa Elselehdar found herself front and center on the internet as hordes of online users looked for someone to point a finger at. Elselehdar, Egypt’s first female ship captain, was hundreds of miles away in Alexandria working as a first mate aboard the Aida IV when she checked her phone and learned of the misplaced blame. While it’s hard to trace the exact origin of the story that placed her at the scene of the crime, supposedly it began when screenshots of a fake news headline were posted to Facebook and Twitter.

“I felt that I might be targeted maybe because I’m a successful female in this field or because I’m Egyptian, but I’m not sure.” — Marwa Elselehdar to the BBC

Sexism in the Suez — In a business where only 2% of seafarers are women, acceptance at sea is still a critical issue. In 2015, Elselehdar became both the youngest and first female Egyptian captain to cross the Suez Canal. She told the BBC that getting to that point wasn’t easy and during her studies she dealt with sexism at every turn along the way. “People in our society still don’t accept the idea of girls working in the sea away from their families for a long time,” she told the publication. “But when you do what you love, it is not necessary for you to seek the approval of everyone.” According to the International Maritime Organization, 94% of female seafarers are working in the cruise industry.

By the numbers — Although President Joe Biden’s infrastructure plan has been criticized by some in the trucking community, a new report from Georgetown University Center on Education and the Workforce paints a different picture. FreightWaves’ John Gallagher reports, “Transportation and materials moving” make up 60% of the infrastructure-related occupations either created or saved by Biden’s plan. In total, 20% (2.81 million) of the 15 million jobs estimated are for commercial drivers of heavy trucks and light truck/delivery drivers.

“We do not believe the Administration’s funding proposal is politically tenable nor a reliable long-term solution to the shortfall facing the Highway Trust Fund.” — American Trucking Associations President and CEO Chris Spear

Roadblock — The plan has to pass Congress but a major sticking point for lobbying groups like the American Trucking Associations and the U.S. Chamber of Commerce is the proposed corporate tax hike from 21% to 28%, which they oppose.

The plot — In 2019, four crew members from Montenegro secured positions on the MSC Gayane with the intent of smuggling cocaine on board the 11,600-TEU Liberian-flagged vessel. The team recruited at least four additional members to pull off the plot, which included using speedboats to slip the contraband onto the ship. Once aboard, the crew hid the cocaine in shipping containers among legit cargo, which they then covered up with fake seals.

The bust — On June 17, 2019, the operation unwound when authorities stormed the MSC Gayane in Philadelphia. FreightWaves’ Greg Miller reports that they found almost 20 tons of cocaine worth over $1 billion hidden in seven shipping containers. You know what else weighs 20 tons? Three tyrannosaurus rexes.

“The company and everyone in it are victims.” — MSC in a letter to U.S. District Court Judge Harvey Bartle II

The fallout — A few bad apples cost MSC a whole damn bunch. In court filings the company detailed some of those. Most immediately, the Swiss-Italian international shipping line was suspended for 90 days from U.S. Customs and Border Protection’s C-TPAT program and had to place $10 million in a CBP security account along with providing CBP with a $40 million surety bond. “In total, MSC’s post-Gayane security enhancements are projected to cost more than $100 million from 2019 through 2024,” it disclosed.

Up 50% in 2020 — Don’t click that free Amazon gift card link! FreightWaves’ Brian Straight reports that omnichannel retailers saw a 50% spike in fraud across their digital networks in 2020 compared to 2019, according to data compiled by security solutions firm Sift. Internet traffic was up 50% and e-commerce purchases doubled last year, but hackers managed to keep pace with that level of scale. In fact, there was a 69% increase in the average value of attempted fraudulent purchases across all industries.

Spider senses tingling — Transportation was the top targeted vertical with an 8.4% increase in hacking attempts in 2020 compared to 2019. Straight reports that Sift estimates more than $1 trillion was lost globally in 2020 due to cybercrime, with ransomware attacks rising 40% and email-delivered malware attacks climbing about 600% from 2019. Last year, major ransomware attacks struck TQL, TFI International, Daseke, Forward Air, CMA CGM and many more.

Never seen before — With TriumphPay’s definitive agreement to acquire HubTran, the combined company will create a fully integrated payments network for the transportation industry, including factors, brokers and carriers.

“With the acquisition of HubTran it fulfills a key missing part for TriumphPay that allows us to create the first transportation network that’s integrated with all parties in the transaction” — Jordan Graft, CEO, TriumphPay on WTT

Get on board — Visit TriumphPay.com to learn how it can drive your business forward.

New owner, who dis? — In 2011, Chip and Rosanna LaBonte were overjoyed when Brooks Brothers began renting their 375,000-square-foot warehouse in Enfield, Connecticut. One decade and a pandemic later, and now the LaBontes are left holding the bag after the high-end apparel company’s 2020 bankruptcy. Last year, nearly everyone traded in tailored suits for comfy sweats, and office attire retailers felt the brunt of that consumer-driven blow. Brooks Brothers filed for bankruptcy last July before being purchased for $325 million by Simon Property Group. Within the next three months, Brooks Brothers would cancel its lease with the LaBontes.

“What kind of heritage can they claim when they operate like low-rent, fly-by-night bullies?” — Chip LaBonte in The Seattle Times

Not our problem — Prior to exiting their lease, Brooks Brothers’ new owners continued to send store fixtures and decorations to the warehouse. According to The Seattle Times, shortly after Thanksgiving the company sent a letter to the couple rejecting the lease as well as the contents of the warehouse. Due to the transfer of ownership, the new owners have no legal obligation to the couple. Now they’re stuck with a warehouse full of inventory that could cost as much as $290,000 to remove. That’s money that the LaBontes don’t have, so they’ve listed their home in Sherborn, Massachusetts, to pay for it. The couple now feels like they’re just another COVID casualty in the retail apocalypse.

Wednesday — FreightWaves’ next virtual event, Enterprise Fleet Summit, kicks off Wednesday, and we’re excited to be doing a full episode of WTT during the show. Enterprise fleets control the majority of the capacity in America, and the decisions they make and the strategies they employ set the tone for the inland transportation industry. How did they manage the challenges they faced from the pandemic, and what will the market look like moving forward? Register for free to find out at 9 a.m. ET when the event goes live. We’re excited to interview:

Friday — We’re back to our regularly scheduled programming with a look at innovation and adoption of FreightTech in ’21, automating the back office, a preview of our newest podcast The Stockout, and much more. We’re joined by special guests: 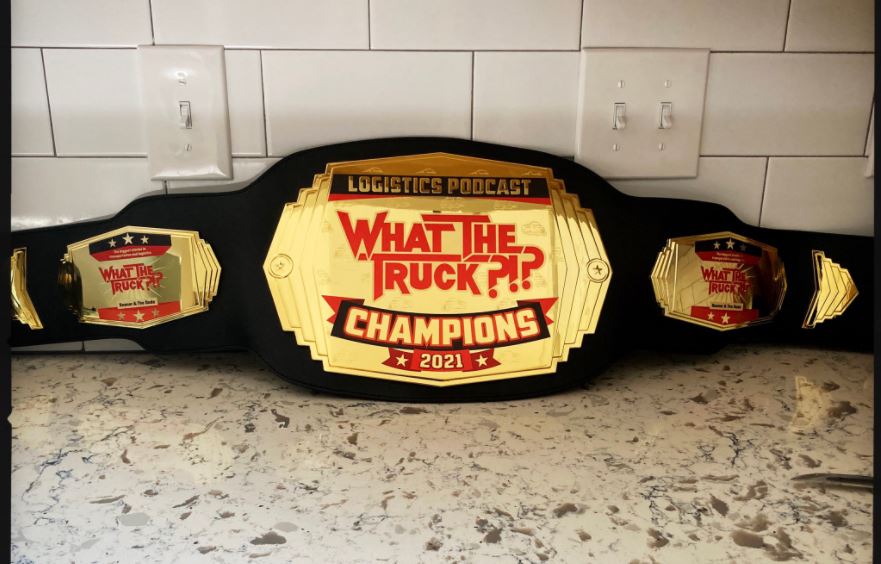 The WTT title has arrived — The logistics podcast championship belt has arrived from TrophySmack. Check out the unboxing here.

Want a new WHAT THE TRUCK?!? shirt and hat? Check out the swag store.

Bloodlines: The business of family

Adapting to the future of final mile