There seems to be no question that guns are popular in the trucking industry, but whether a trucking company would change its internal policies if federal concealed weapons laws became less strict is less certain.

Responses to an informal, nonscientific email survey sent to a broad selection of drivers, owner-operators, managers and fleet executives revealed that close to 70% of respondents from companies with 500 trucks or less either sometimes or always carry a concealed gun on their persons or in their personal vehicles when they are not on duty.

The study also found that between 76% and 90% — depending on the size of the company — believe that truck drivers should be able to travel freely between states while carrying a concealed weapon. 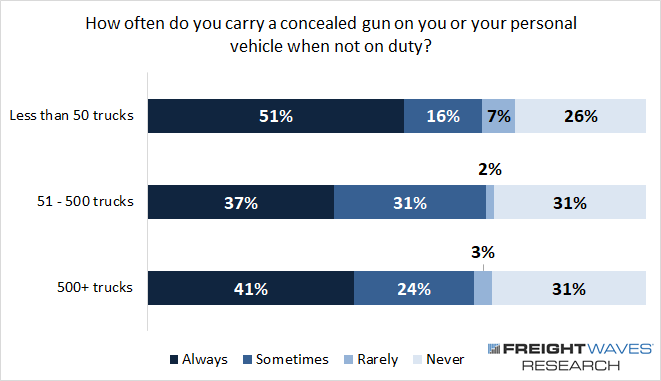 At the same time, more respondents from companies with 500 or more trucks answered “I don’t know” (41%) to the company policy question than “no” (21%) — more evidence that it’s not a cut-and-dried issue.

“I think that a federal concealed carry reciprocity law would probably be a positive for those drivers legally authorized to carry already due to the difficulty in trying to figure out which states already allow for reciprocity,” said Paul Taylor, a labor and employment attorney with the Truckers Justice Center.

But Taylor also emphasized that a loosening of federal laws would likely not take precedence over internal company policies that prohibit the carrying of firearms. “Trucking companies could be held liable for [accidents or lawsuits involving handguns] depending on the situation, so the market would have a way of dealing” with changes in gun laws, he said.

Backers of concealed carry reciprocity among states point out that truck stops are used by criminals who look for out-of-state license plates in targeting drivers who are not legally allowed to carry across state lines. The survey found that the smaller the trucking company, the less often its trucks had been burglarized. 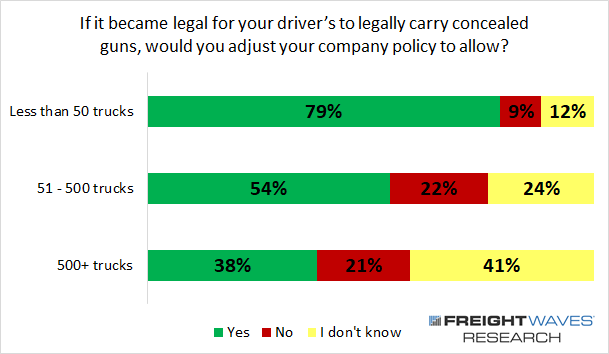 Based in Washington, D.C., John specializes in regulation and legislation affecting all sectors of freight transportation. He has covered rail, trucking and maritime issues since 1993 for a variety of publications based in the U.S. and the U.K. John began business reporting in 1993 at Broadcasting & Cable Magazine. He graduated from Florida State University majoring in English and business.